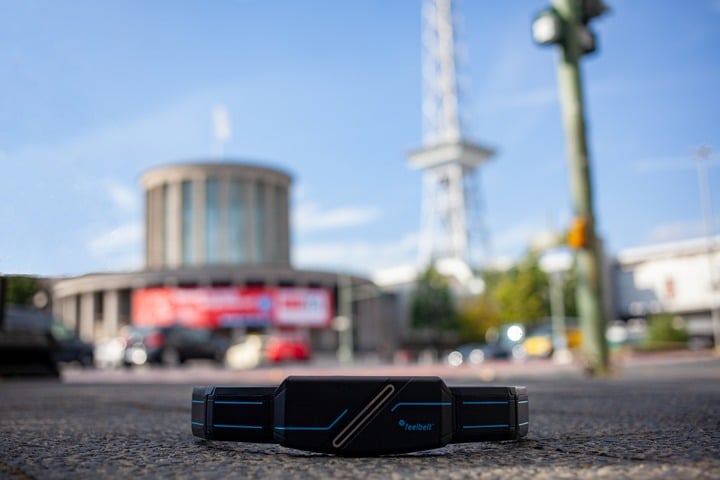 Berlin – Tuesday, 12 September 2019 – The Feelbelt and the company of the same name presented themselves to the public for the first time at the IFA in Berlin. For 6 days the approximately 250,000 IFA visitors had the chance to see the product up close and test it.

“We at Feelbelt have the vision to create the best music experience ever,” said Benjamin Heese, managing director and one of the two founders of Feelbelt. “The concert experience is brought to your home. Anywhere and anytime,” adds Felix Weiß, his co-founder. Together with the FH Potsdam, Heese and Weiß have developed the idea of inventor Jens Hansen and finally successfully implemented it.

For the first time, they manage to convert the entire audio spectrum into impulses and to transmit them via the Feelbelt directly to the body. The Feelbelt opens up a new dimension of listening to music, can can be worn on clothing and fits flexibly to the body. The belt can be connected with any audio source via Bluetooth, WLAN or jack plug to the start a new music experience.

The Feelbelt is designed and produced in Berlin, which the team consciously decided on.

“You always say that you feel music. For the first time, I’ve actually been able to feel all the music,” says a tester at the IFA. “The music is streaming through your entire body. It gives me goose bumps – Madness” said another test person. Another one said “It feels like being at a concert in first row, directly in front of the box”. The feedback was mostly positive and points to an exciting future for the young company.

For the first time, the deaf and hearing-impaired can also use the Feelbelt to enjoy the entire music spectrum and thus participate in the musical experience. At the IFA there were impressive experiences and emotional outbursts of hearing impaired people when using the Feelbelt. Further tests will will take place in the future.

Market entry for the Feelbelt is planned for the beginning of 2020.

About Feelbelt:
Feelbelt is a young company from Potsdam. After years of development they succeeded for the first time, to extend music listening by a whole dimension: The birth of Feelbelt – a belt that transmits impulses to the body synchronously to the music. And that for the entire audio spectrum from 0 – 20,000 Hz.
Feelbelt is located in beautiful Babelsberg, produced in Berlin and consciously supports local Companies. In development and production, Feelbelt works with Max Auer and Brose Systeme.